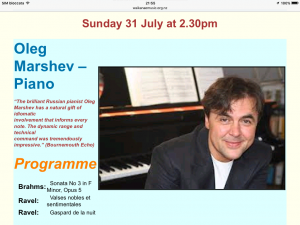 This was the sort of programme that, on paper, would quicken the pulse of anybody interested in the romantic piano repertoire in general – and with Oleg Marchev’s name attached to the enterprise, would settle the issue for the majority of piano-fanciers, myself among them. And while I might not have put Brahms’ name forward as a composer whose music I would have liked to hear Marshev play ahead of people such as Liszt, Rachmaninov and Prokofiev, I confess was eagerly anticipating the chance to hear in recital that seldom-played titan among piano sonatas, Brahms’ Op.5 in F Minor.

Is there a more confrontational, cheek-by-jowl, eyeballing opening to a piece of solo piano music in the romantic repertoire than the beginning of this work? My first-ever live encounter with this music was at the hands of the great Peter Donohoe (until recently, well-known to New Zealand audiences), on a never-to-be-forgotten occasion I witnessed in a Midlands English town twenty years ago, when he too began his recital with the piece. There I felt as if the piano was in danger of coming apart out of sheer strain generated by the power and physicality of the playing! – and even with Marshev’s slightly more controlled responses to the music, I still got the impression of a fist being shaken at the heavens, though with rather more nervous energy and urgency than sheer, granite-like power and muscle.

As important as these moments were the contrasting lyrical sequences, which Marshev presented in beautifully-appointed paragraphs, building the ensuing surges of tone up into noble climaxes. What the playing might have lacked in raw visceral impact, it gained in cumulative effect, Marshev’s control excitingly let off its leash at the development’s opening, the pianistic textures jagged and attention-grabbing, leaving our sensibilities exhausted and gratefully receptive to whatever solace the music brought us in the aftermath. A noble, golden-toned major-key version of the opening reassured us for a few moments before the music plunged back into the opening, everything once again magnificently orchestrated and awe-inspiring. How wonderful it was to be again relieved by Marshev’s way with those poignantly contrasted, rolling lyrical paragraphs once again, persuading us that life’s storms are to be stoically endured rather than suffered without any hope or consolation.

The second movement of this work, Andante expressivo, has frequently provided ammunition for commentators mindful of the conflict between rival musical factions in the latter part of the 19th Century. A war of bitter acrimony sprang up between the conservatives, who upheld Brahms as their champion, and the supporters of the “New German School”, who promoted the music of people such as Liszt, Wagner and Bruckner. The reactionary critic Eduard Hanslick was a particularly virulent opponent of the latter group and their ideals, in particular the idea of “programme music”.

Hanslick at one stage famously declared that “music has no subject beyond the combinations of notes we hear, for music speaks not only by means of sounds, it speaks nothing but sound.” However, here was Brahms, the darling of the conservatives, prefacing a movement in one of his works with three lines of poetry from the work of the poet Sternau: – “The twilight falls, the moonlight gleams, two hearts in love unite, embraced in rapture.” It didn’t go unnoticed in some quarters that Hanslick was strangely silent concerning this “self-indulgence” on the part of his young champion!

Leaving aside Brahms’s use of poetic imagery as inspiration, I’ve always thought a separate irony regarding this music was that it sounded so much like Liszt in places! Marshev sang it all so beautifully, seeming to echo the legendary pianist Claudio Arrau’s words, “..the most beautiful love-music after Tristan – and the most erotic”, building the piece’s amplitude to majestic proportions at the climax, and rounding off the resonances with properly bardic tones at the end. Then, again, with the mighty Scherzo that followed, bursting in on the tranquility of the Andante’s aftermath, Marshev gave the “motorcycle kick-start” aspect of the music plenty of muscle and flair without making an absolute meal of it, keeping the waltz-rhythm poised throughout, and taking care to preserve the slightly creepy, almost spectral aspect of those descending arpeggio figures.

If the Andante enshrined a kind of love-tryst, the fourth-movement Intermezzo (subtitled Rückblick -“backward glance”) seemed to negate the former’s sentiments, giving us sorrowing descending figurations and fraught declamations of despair punctuated by muffled drum-beats – again, to my ears, the shade of Liszt flitted among the music’s textures, Brahms’s utterances echoing gestures found in places in the older composer’s Annees de Pelerinage collections. As for the finale, Marshev nicely energized the angular, whimsical opening, enjoying the contrasts of the instrument’s different registers, and pointing the contrast with the warmly-flowing second subject, bringing out the cascading accompaniments and the beguiling mix of elfin playfulness and portentous gesturings which whirl the different episodes through to the celebratory coda, as festive and exultant anybody would wish for.

Despite all of these felicities, I found myself struck by the feeling, when Marchev came out after the interval and began the first few measures of Ravel’s Valses nobles et sentimentales, that here was the music this man was born to play – those first sounds had a kind of insouciance which felt so right, a glowing kind of poise which instantly captured the listener’s attention and enchanted the ear. Here was a cool, spacious, limpid, completely malleable sound-world recreated before us by a master musician, completely at one with the music’s composer and his particular vein of magic.

Marshev brought out in places the links with the composer’s own orchestral work La Valse, which appeared nine years afterwards. We got a teasing foretaste of the latter in the fourth waltz, Assez animé, and again in the ninth piece, Moins vif, whose halting, hesitant steps at the beginning gradually coalesced into the most outrageous and unequivocal of dance-gestures, beautifully and commandingly brought into being. The final waltz, Épilogue, lent, was all magical, nostalgic driftings, forms delicately shaped, and colours wondrously subtle, making for a heart-rending, lump-in-the-throat experience. It was all a rare evocation of creative mastery, spread out before us like W.B.Yeats’ Cloths of Heaven – “Tread softly, because you tread on my dreams”.

Ravel himself regarded the Valses as “…le plaisis délicieux et toujours nouveau d’une occupation inutile” (“the delicious and ever-fresh pleasure of a useless occupation”) – but his 1908 work Gaspard de la Nuit by contrast seemed to have engaged his sensibilities to an unprecedented degree. A group of poems, notable for their preoccupation with the surreal world of dreams written by the French Romantic Poet Aloysius Bertrand (1807-41) and published under the title Gaspard de la Nuit provided the composer with his inspiration – Ravel chose three from a set called La nuit et ses prestiges (“The Night and its Distinctions”), the first being the poet’s version of the age-old story of Ondine, the water-sprite who falls in love with a mortal.

Having said that he wanted “to say with notes what a poet says with words”, Ravel did precisely that, evoking the world of the mischievous nymph teasing and tantalising the sleeper with a dream of delight which at the end dissolves in a shower of waterdrops flung against the “resonant panes” through which shone the moonlight. Oleg Marshev was this music’s ideal interpreter here, magically evoking the liquid playfulness of the nymph’s appearance. His playing of those repeated notes and floated arpeggiations conjured up a beguiling world of enchantment, holding us in thrall to the apparition’s beauty and beguilement before bringing dream and reality together in a frisson of alarm and confusion as the nymph mocked her would-be mortal lover and vanished – the pianist caught, in those moments immediately afterwards, those vast spaces between dream and consciousness, echoing with hints of distant laughter and/or weeping.

Just as evocative was the second piece Le gibet, after Bertrand’s bleak depiction of a corpse hanging from a scaffold in the reddening light of the setting sun. Marshev caught the mood of utter desolation with his spacious, patient unfolding of the grisly scene, his playing of the tolling bell’s ostinato pitiless and inexorable in its effect. I have heard those eerie, descending chords played even more creepily than here, somehow “prepared” even before being sounded, held back fractionally so that there’s a sense of a kind of horror whose depiction is about to take its toll on both player and listener, a feeling which Marshev’s cool and dispassionate reading didn’t explore. Instead I felt the playing had a disconsolate feeling of finality, the ending superbly wrought, with the bass notes shrouding everything in gloom.
Ravel apparently wanted the last of the three pieces, Scarbo, to surpass in difficulty Balakirev’s tone-poem for piano Islamey, thinking in terms of an orchestral transcription for the piano. Here was menace aplenty, the composer’s depiction of a demonic goblin-like nocturnal visitor, the “Scarbo” of Bertrand’s poem. Marshev’s playing conjured up real “glint” amid the gloom, bringing out the music’s volatility and unpredictablilty as per the character, and infusing the Hispanic dance-rhythms with tremendous elan. He got that “frightening nothingness behind the curtain” feeling in the music’s quieter, more louring sequences, and then magnificently orchestrated the creeping chromatic sequences that brought the piece to its overwhelming climax and enigmatic, sotto voce conclusion – “his (Scarbo’s) face pales like the wax of a candle-end – and suddenly he is extinguished…..”
As if we all needed some “normality” at the conclusion of such flights of fancy, Oleg Marshev generously gave us two encores, a beautifully-graded Chopin Prelude (No.4 of Op/28 in E Minor), and Rachmaninov’s Op.23 no 5 G Minor Prelude, the latter featuring the occasional volatile rhythm-surge in the march’s accompaniment, and some beautiful counter-voicings in the trio. Perhaps if we’re lucky enough to get a return visit we might hear from Marshev some more Rachmaninov – one of the sonatas, perhaps, or the unjustly-neglected Corelli Variations which, admittedly, I heard him play on a previous visit – but I would love to hear him play the work again…….

One thought on “Oleg Marshev- pianistic pleasures at Waikanae”